Annapurna Circuit Trek (12 to 18 Days)
Recommended: October to November OR March to April

One of The Best Teahouse Treks That Also Takes You Over a High Mountain Pass.

After a bus ride to Besi Sahar, the trek begins. Take the dirt road to Bhulbule or cross over to the other side of the Marshyandi river. The first village reached is Khudi after which comes Bhulbule (840m). At Bhulbule you enter the Annapurna Conservation Area but the check point is at Dharapani. Mountain views dominate.

Follow the trail on the east bank of the river enjoying views of mountains. Past the bamboo groves and a steep climb lies Bahunedanda (1270m). There are panoramic views after climbing further up. A steep descent is followed by a climb to a ridge leading to the village of Kanigaon. Soon after, Ghermu (1140m) is reached.

The trail drops and leads to a suspension bridge over the Marshyangdi at Syange. Next, you walk through a steep canyon. After another descent, Jagat is reached. From here the trail descends further down to Ghatta Khola. There are many lodges along the way. Walking past a bamboo grove and rhododendron trees you enter Manang District and finally reach Tal (1700m) below a large waterfall.

The trek to Chame (2710m) is long but you can overnight at one of the places along the way such as Timang, Koto or Karte. You’ll be passing through many suspension bridges. After going through Dharapani and Bagarchap, you arrive at Chame where there are plenty of lodges and a bank where you can change money. There’s a hot spring nearby and views of Lamjung and Annapurna mountains.

Views of Manaslu and apple orchards before arriving at Bhratang following a 1 ½ hr walk. An unforgettable sight awaits - a rock face that rises 1500m from the river called Paungda Danda. First Lower Pisang (3240 m) is reached. The lodges at higher levels at upper Pisang have better views of the mountains.

The longer, higher route is better than the shorter route. The trail rises above the Mring Tso (lake) and finally descends to Ngawal. You then come across the picturesque village of Bragha (3470m) where you’ll find a most interesting Bragha Monastery. Just a short climb later you arrive at Manang (3540m). Annapurna and Gangapurna mountains loom large as they are only 8 km away.

You can visit Milarepa’s cave nearby as you need an extra day in Manang or Bragha for acclimatization. Manang to Khangsar (1 ½ to 2 hr): The trail descends and then climbs again after crossing the Jarsang Khola. After the pine forest and wheat fields you arrive at Khangsar (3745m). Tilocho Lake is a good side excursion although a tough one.

You leave the Marshyangdi valley behind as you climb up. The vegetation changes to shrub and Letdar (4230m) provides the last accommodations before Thorung la (the pass).

Walk along the banks of the Jarsang khola, cross over and climb up to Thorung Phedi (4540m).

Get advice from locals about weather conditions, snow conditions and avalanche before heading off to Thurung la (5416m). The climb is steep and the weather can change or too much snow can block the path. In such conditions one must return to Phedi. The climb to the pass can take anywhere from 3 to 5 hr. Amazing views of Annapurna, Gangapurna, Manang, the Kali Gandaki valley and more. The descent to Muktinath (3800m) is difficult. There are no accommodations near this famous temple so carry on to Ranipauwa (3710m).

Enjoy the outstanding views as you look down toward Jharkot. The trail descends down the Jhong valley to reach green Kagbeni (2840m).

You will be well advised to start early to avoid the strong winds that come up the valley after 11 am. You can visit the Bon village of Lubra before reaching Jomsom (2760m).

A very short hike which ends after crossing the Pankya Khola. Marpha (2680m) is known for its unique alcoholic drinks made from apples, apricot or peach.

Take the alternative route via Chhairo and Chimang to avoid traffic on the main road. Pass through Tukuche’s stone houses. Enjoy the views of Dhaulagiri and Nilgiri North peaks. Around Larjung (2560m) there is much to explore especially the meditation caves.

Walking through Lete and Kalopani, you reach Ghasa (2000m) the last Thakali village and also the point from where the landscape changes to subtropical.

You can avoid the main road and follow the mule trail. Tatopani (1190m) gets its name from the hot springs nearby where you can take a dip.

It is possible to catch a bus from here to Beni or Pokhara, but you’ll miss great views of mountains and rhododendron forests. A hard climb uphill leads to Ghorepani (2750m). An early morning visit to Poon Hill rewards you with spectacular views of the Dhaulagiri massif and some of the Annapurna peaks.

An early descent from Ghorepani means you’ll be back in Pokhara via Naya Pul with plenty of time on your hands. 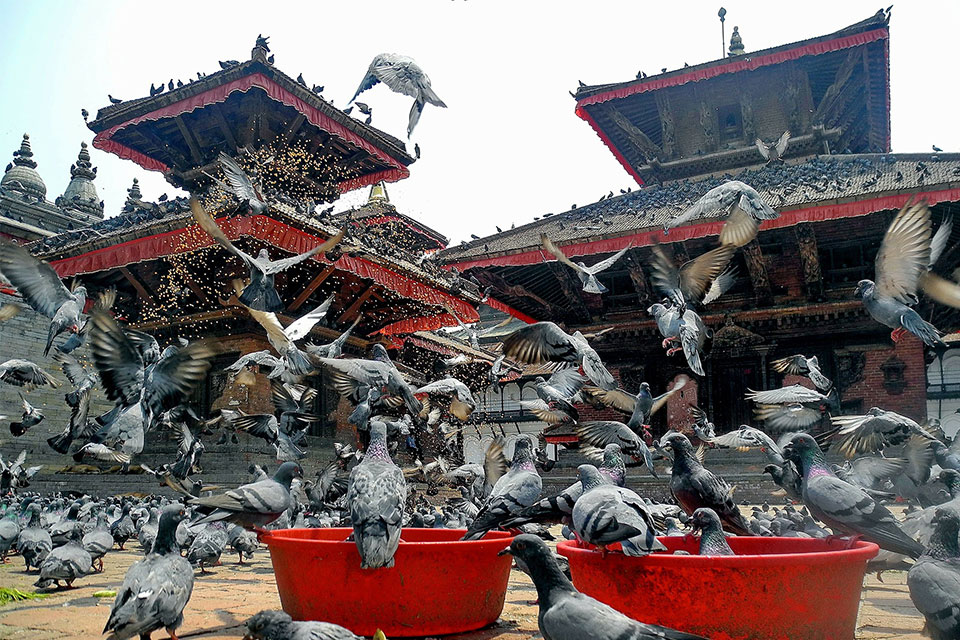 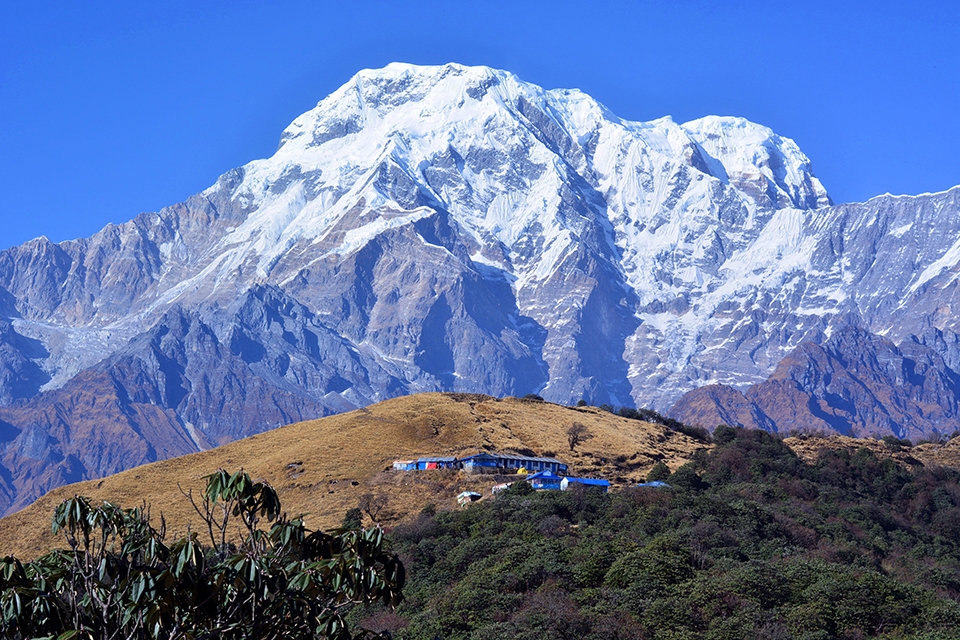 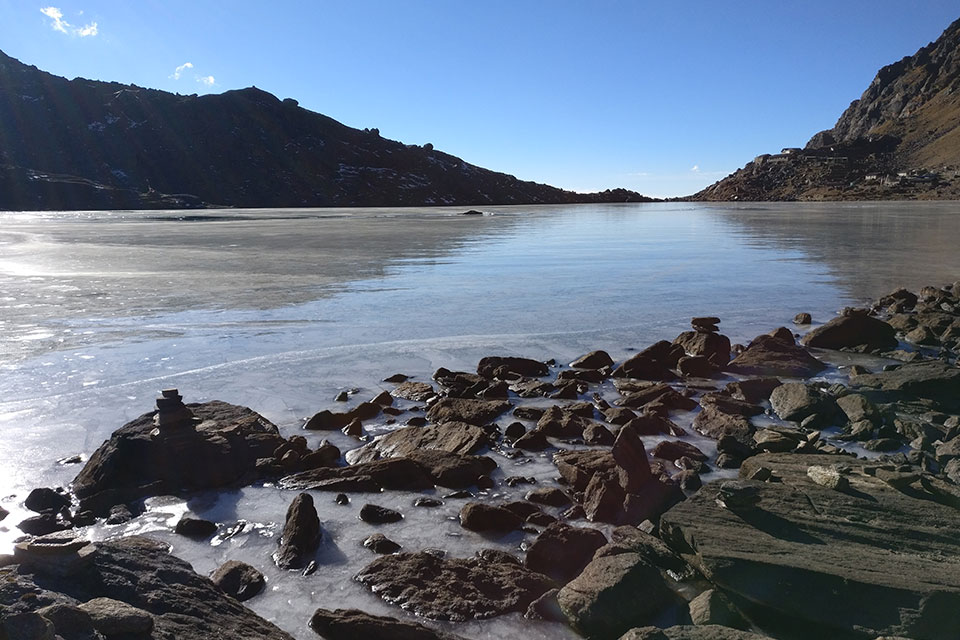