In the year 1885 A.D, Bir Shumsher Jung Bahadur Rana, one of the most distinguished of the powerful Rana Maharajas and a renowned builder and musician, built the most elegant palace theatre in Kathmandu. 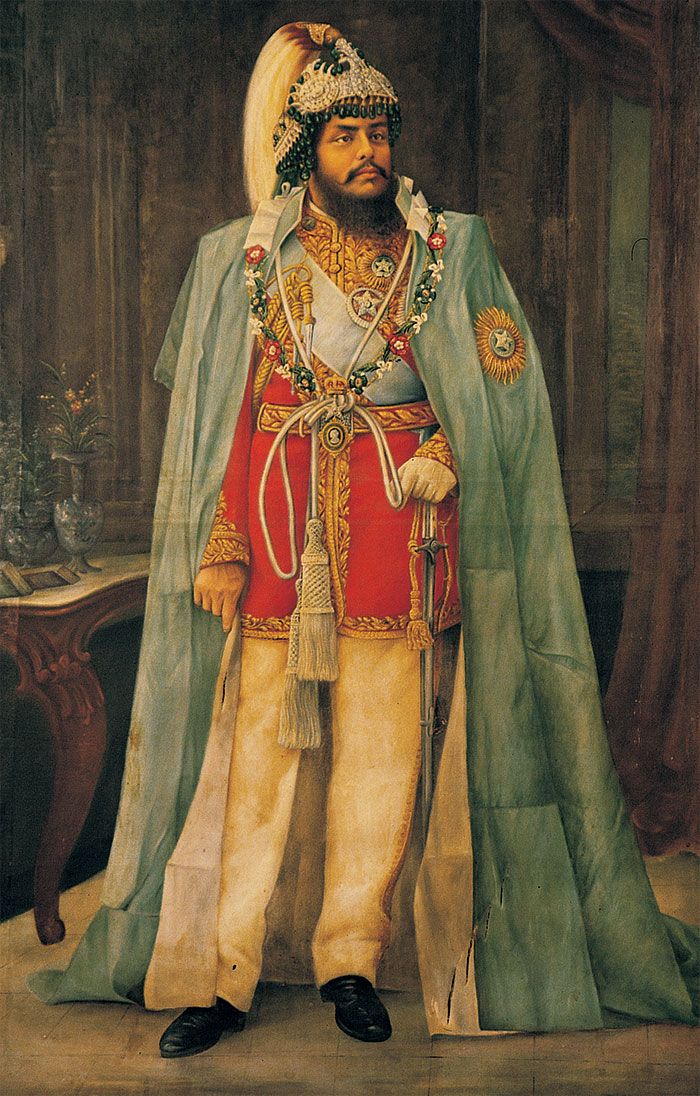 Maharaja Bir Shumsher Jung Bahadur Rana, was the 11th Prime Minister of Nepal. He is remembered as a statesman who made important reforms and infrastructure improvements.
Born: December 10, 1852, Kathmandu
Died: March 5, 1901, Kathmandu

The opulent Rana Dynasty began in 1846 and during the following century Kathmandu’s gorgeous neoclassical architecture bloomed to compliment the decadent life of grandeur of the Rana's.

Forty years later, continuing in the tradition of Rana splendor, Jung Bahadur’s nephew, Bir Shumsher Rana, built the grand Lal Durbar or the Red Palace as a theatre and residence for his family. The red marble was shipped in from Italy and carried from Calcutta to Kathmandu on the backs of porters along with many other precious items. Mirrors and chandeliers were also imported from Europe – no expense spared in homage to the decadence of the era. The Maharaja’s bedroom, now the Dynasty room is a classic example of the opulence in design and execution with gold embossed walls, gilt mirrors and exquisite chandeliers.

Nearly a century after the Rana rule began, in 1944, King Tribhuvan met a charismatic Russian by the name of Boris Lissanevitch in Calcutta at the infamous 300 Club. Boris was a chef, a former ballet dancer and Russian Army deserter and the king was fascinated by this enigmatic character. Thus started the beginning of a friendship that could be considered to have changed the course of Nepal’s history. Soon after the King invited Boris and his young bride Inger, to Nepal for Prince Mahdendra’s wedding. There was no looking back for Boris – he immediately fell in love with Nepal and soon took up residence in Kathmandu.

Whether Boris did actually have any involvement in restoring the Shah dynasty to power remains rife with speculation but there is no doubt, it was his role in opening Nepal to foreign tourism that changed the country forever. In the early 1950s, Boris opened the Royal Hotel in an old Rana palace. This was Nepal’s first luxury hotel and a place fit for western dignitaries and tourists. For many years, the Royal Hotel’s bar and restaurant, the Yak & Yeti, was a popular destination for the few expats working in development, mountaineering parties that were staring to gain momentum and the local elite. There wasn’t really any competition and the Royal Hotel became a famous destination in circles abroad. As tourism in Nepal boomed and other hotels were established, business at the Royal Hotel declined and in 1969, the famous hotel closed.

The Yak & Yeti restaurant and bar of the Royal Hotel had been a popular destination so Boris opened another restaurant in the Lal Durbar palace along with his business partner, Radhe Shyam Saraf. This was still the only fine dining restaurant in Kathmandu and garnered a good reputation with Boris’ creative international menu. The idea of expanding into a hotel followed naturally and after four years of building, the Yak & Yeti Hotel opened on 27 September 1977 to celebrate world tourism day. Initially 120 rooms, in the early 90s, an extension of an additional 150 rooms was added bringing the total to 270 rooms for this 5-star property. The new wing was designed to compliment the style of Lal Durbar and throughout the property traditional Nepali features have been preserved to offer an exceptional environment while providing all the modern facilities and comforts required for 5-star luxury.

The Yak & Yeti Hotel as it stands today is inextricably linked to Nepal’s colourful history, proudly showcasing the beautifully restored Lal Durbar space as part of Kathmandu’s biggest convention center. Artefacts and antiques have been lovingly preserved throughout the property maintaining the Rana splendor of long ago.

Forty Two Years old fine dining restaurant with a Sixty years old copper chimney, recently revamped into casual and sustainable restaurant for all. With new additional of terrace seating, we also have fusion of many dishes for a new taste.